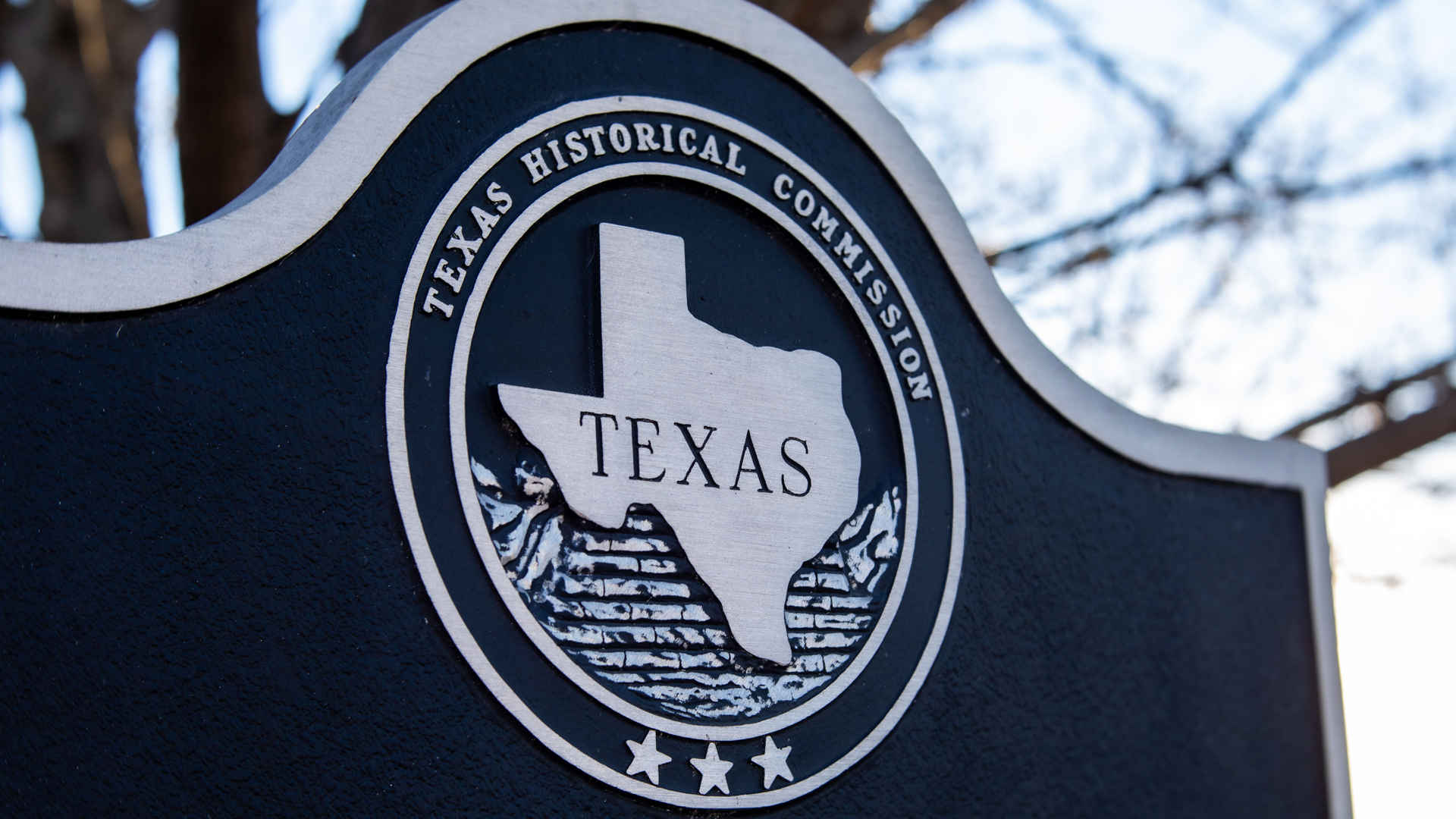 But what many people don’t realize is the very frequency of these Wood County historical markers—there are, in fact, almost 100 historical markers and recorded Texas historic places in Wood County alone. These historical markers are not only a mark for our past, but they signal what may be in the future, as they can positively influence historical tourism, heritage tourism, and cultural tourism. Some may think that these signs are little things without significance—something to be ignored—but in reality, each historical marker is a memorial, a remembrance of the sparkling gems of history that came before us and yet which still influence us today.

For a town numbering a little over 4,600 people, Mineola can sometimes seem like the historic hub of Wood County. This small but beautiful community boasts more than 20 Wood County historical markers within its borders, and many more on its outskirts. A source of local pride, these places, people, events, and ideas are the inspiration for much of Mineola’s small-town charm.

First among the town favorites is the Select Theater in Mineola (colloquially called “The Select” or just simply “the theater” by residents). It is famous for several things, but its main claim to fame is that it is the oldest continuously operating theater in the state of Texas. It was first purchased by Mr. and Mrs. R.T. Hooks, Sr. in 1920 and operated by the pair until “time moved on,” as their website states, and Mr. R.T. Hooks, Jr. took over. There was a major renovation of the beautiful movie house in 1948, when a concession stand, a cry room, the marquee, and the neon tower (among other things) were added. Interestingly, residents of Mineola like to tell the story that the famous neon tower could once be spotted from a mile away!

This cultural hotspot was purchased by two longtime employees in the 1960s. After their retirement, the theater was acquired by the Lake Country Playhouse, which owns and operates this nonprofit charity through a mix of volunteer management (such as the board and actors/actresses) and paid staff (such as the executive director and concessions workers) to this day. This historical marker is not only a major piece of cultural and heritage tourism, but it is also a perfectly idyllic and amazing way to spend an evening, reminiscent of a 1950s “night out on the town!”

A second historical marker worth mentioning, which is not only important to residents of Mineola but which, at one time, was quite near and dear to the hearts of many across the state, lies just down the street from the Select Theater: What used to be a Dr. Pepper bottling plant! This old building, which now serves as the Student Center for Mineola First Baptist Church, has an interesting historic heritage behind it.

According to the plaque outside the building, three people—Taylor Greer, Henry Mings, and A. W. Fulcher—purchased the building in 1913 with the intent of bottling and canning milk and soft drinks. However, Mr. and Mrs. Greer later bought out the other owners and were operating under the name “Greer Bottling Works.” They quickly grew their business, receiving a franchise for Orange Crush in 1926 and then 12 years later buying a franchise for Dr. Pepper. Even after the death of Mr. Greer in 1938, Mrs. Ebbie Greer continued to bottle the drinks until she sold the plant in 1955.

Conveniently down the street from both of the previous historical markers, the next marker is an extremely culturally significant one for the city of Mineola. It sits before the beautiful old home of Harry W. Meredith, patron of the arts, Mineola’s youth, and various other worthy causes in days gone by. The house, which sits adjacent to the Mineola Public Library (another unique and interesting building with a historical marker), was built by Kentucky native Harry Meredith and his first wife, Mary in the 1920s. Before building the home, Mr. and Mrs. Meredith were living in Mineola at a different location while Mr. Meredith became the president of Mineola State Bank. Interestingly, at the same time as building this stately old home and as being the president of the Mineola State Bank, Mr. Harry Meredith also served as the mayor of Mineola for two years (1920-1922)! He became the director/chairman of the board 12 years later in 1932, when the Mineola State Bank merged with First National Bank.

Beginning in the 1940s, Mr. Meredith began to donate to philanthropic causes in the Mineola / Wood County area, including funding the Mineola Public Library (which still receives part of their nonprofit funding through the Meredith Foundation), the Mineola Civic Center, “two dormitories at the Methodist Children’s Home in Waco,” (source: historic marker), Mineola’s youth, the arts, and several local churches. His 1920, almost 5,000 square foot, historic Wood County home is actually currently for sale, as the previous owner (who seems to have bought it directly from Harry Meredith) recently moved out. The home features four bedrooms, four bathrooms, at least two kitchens, several large living spaces, a staircase, and an in-house elevator, not to mention several outbuildings. The outside of this home and the historical marker in the front yard are definitely worth a look!

Wandering outside Mineola, visitors may desire to head to the Wood County Courthouse in historic Quitman, Texas. The courthouse, which is situated in the heart of Quitman’s beautiful downtown district, features an impressive brick façade, a grand stair with raised entry, and a four-column temple front. The courthouse as we know it today was built as the fourth replacement for a long line of courthouses that came before it and has stood in solid guardianship of the county ever since its construction, having only had an annex added in 1950.

In direct contrast to the solidarity of the current courthouse, however, the stories of all the previous Wood County courthouses are so strange as almost to remind one of a curse! The first courthouse, made of log, was discarded by the county for unclear reasons. Its replacement, a two-story beauty, burned down in 1878. The third courthouse, completed in 1884 with unique rounded windows and an almost gothic-looking style of architecture to its two stories, in 1924 also burned down, making it last only 40 years after it was built. The fourth and final courthouse was built by Rice Construction Company, designed by C.H. Leinbach of Dallas, and commissioned by the county in 1924. Today, the courthouse houses several different and important Wood County offices, including the offices of the County Clerk, the County Judge, the County Commissioners, the District Attorney, the Probation Office, and a marriage license office.

Outside of Quitman is the historic and culturally relevant Clover Hill Cemetery. Established by families coming from Georgia and Alabama in 1857, the cemetery and the adjacent church have some intriguing stories behind them. For instance, the cemetery’s oldest marked gravestone has a unique and interesting twist: The oldest headstone is that of Miss Martha Benton, a woman who was originally buried near her home (per the tradition of that time) but whose gravestone was actually moved to the Clover Hill Cemetery several years after her death. Interestingly, due to the situation with her body at her home and her headstone at the cemetery, her headstone is the oldest marked one in the plot, but the first person actually to be buried in the cemetery was “Little Buddy,” the son of G.H. and Sallie Pogue, in 1868—six years after Ms. Benton’s death. The church adjacent to the cemetery, whose site was chosen for its beautiful hill of peaceful yellow clover, is still called Clover Hill Baptist Church today.

In Winnsboro, visitors will be intrigued to find Chalybeate Springs, a place that used to be a thriving little community but is now little more than a remembrance of the past. The springs, which were named for their high iron content, soon became the source of a small community as well as a source of supposedly “healing” waters. By 1881, the village had several churches, a post office, a couple of stores, and, most importantly, a two-story hotel and spa built by Walker Fore. The hotel, which boasted 27 rooms, attracted tourists and individuals looking for a change of climate and for the alleged “healing waters;” however, by 1895, the hotel was forced to shut down for unclear reasons, and the building was destroyed in 1935. The community, deprived of its “claim to fame,” declined, and the community school was closed by the 1950s. Today, Chalybeate Springs is essentially no more than a tract of land, although the legacy of the springs is a fascinating piece of Winnsboro’s cultural and heritage.

This gem of a Winnsboro story is really quite fascinating. The church, which was established with just five members, originally met under an arbor tree in 1881. According to popular legend, the members decided to give the church its namesake since they were convinced that there was “Little Hope” that their church would survive; however, surprisingly, membership began to steadily increase, as did the community surrounding the church. Baptisms for the church were actually held in the nearby mill pond owned by J. A. Stinson, the man who went on to own the beautiful “Lankford-Stinson House” in Winnsboro. In 1881, J.D. Cox donated some of the land that the church sat on, and in the few years following, the church purchased three more acres. Small pieces of land were continually added to the church property. A peaceful cemetery and a small community grew around the old church, which seems still to be functioning, although the community has unfortunately long since dissolved.

Although the sweet town of Yantis, a community boasting only 438 people, doesn’t always have a lot to say, when it does, it can be extremely interesting. This historical marker, Yantis’ only one, is a good example of just that: A heart-warming story of early Wood County pioneers and of the heritage and culture of the Yantis / Wood County area.

In 1900, a group of families from Indiana were attracted to Texas under the promise of fertile land and plentiful timber. However, upon arriving in the area, the families realized that what they thought would be rich and fruitful countryside was actually very poor farmland, as it was near what is now the Lake Fork Reservoir area and the land was susceptible to heavy flooding. Many of the families returned to Indiana right away. In 1901, however, the persistent few established a schoolhouse community, building a schoolhouse made of local timber and naming their small town “Little Indiana” in honor of their state of origin. The community continued to grow and add other establishments, at times seeming centered around the seven-grade schoolhouse featuring only one teacher. However, sadly for the brave pioneers, by 1907 the community had either died out or moved, as the land proved unsustainable due to poor agricultural returns. A large part of the community moved back to Indiana, but some settlers relocated to other parts of Texas.

These are but a few of some of the most interesting historical markers in Wood County. If you find yourself interested in these or any of the other nearly 100 markers scattered across our beautiful county, please explore, learn, and dive into the history and heart of these early American stories by driving around or exploring these websites: